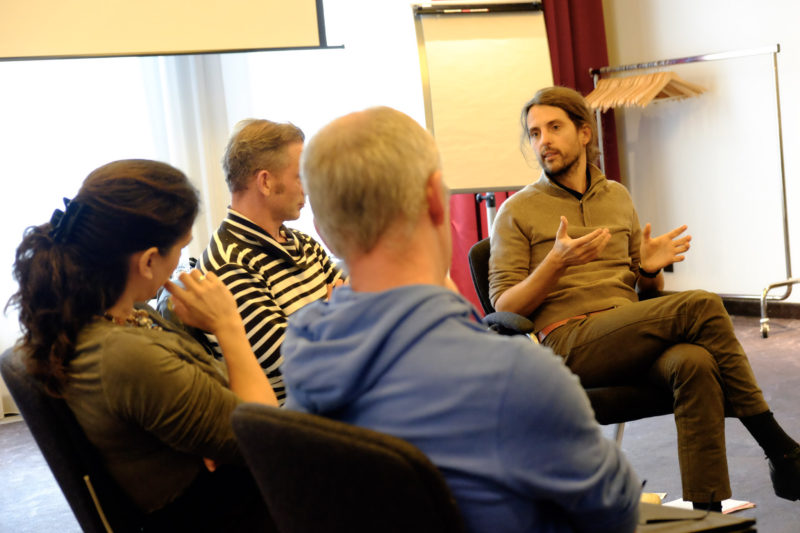 In the sixth letter of the REFLECT-correspondent we wrote how “questioning is an important tool for educators to direct the reflective attention of learners. General phrased, it should help educator and learners to inquire more in depth that-which-is-at-stake.  (…) [However,] deepening your questioning is not that much about asking continually more and more complicated and sophisticated questions. Rather, it’s about exploring more in depth how learners look at that-which-is-at-stake (be it themselves, be it the world in the most broadest sense of the word as ‘theory’ can also be understood as a ‘window’ to the world).” (Holding the space, 2016:35).

We will post each week a short text as a ‘starting point’ for participants to share their experiences, remarks and questions.

13th March: process-oriented interventions during a conversation and generative listening

To participate in this learning event, we ask you

Generally phrased, one could say questioning has two different, but sometimes interrelated aims in order to direct the reflective attention of learners to that-which-is-at-stake. Firstly, it helps learners to explore aspects which, at first hand, they don’t pay (enough) attention to.  In this way, questioning is topic-oriented and stimulates learners to start constructing a broader scope on the topic. Secondly, it can foster learners to take some distance from what they are actually thinking and feeling and to become more aware of their mental and/or emotional processes. Here, questioning is, let’s say, awareness-oriented. The attention of learners is not directed to a new topic as such, but to their frame-of-reference through which they see the topic, be it themselves, the others or the world. Referring to the cognitive scientist Francisco Varela, Peter Senge and Otto Charmer call this shift in awareness ‘suspension’. It’s “removing ourselves from the habitual stream of thought” (Peter Senge, Otto Scharmer e.a., Presence, 2005: 29) and allowing ourselves to see our way of thinking and feeling. In this awareness-oriented way, questioning stimulates learners to start constructing a kind of internal space in which a conversation between themselves and their thoughts and emotions can take place.

In our letter we suggested several questioning strategies in order to create a broader scope and space for reflection. We finish with two point of attention (see Holding the Space, 2016:35-7).

Please share your experiences, remarks, questions about the following questioning strategies. Maybe you can add some new ones…. Use the space for ‘reply/comment’ on the right site of this web-page.

First strategy: beyond the first answers

Don’t be satisfied with short, general answers which usually come up first, but dig a little bit deeper in order to get a more nuanced or detailed view on the underlying arguments, assumptions or values which let learners answer the way they do. Sometimes even a simple ‘is it really like this?’ followed by some silence, can do the work (this is at the same time an invitation from the educator to ‘own’ the question by the learner).

When you are discussing the theory of a certain author, just asking tentatively how they connect his ideas to their personal experiences, will direct attention to the learners’ personal frames-of-reference.

Third strategy: introducing the opposite perspective

Another possibility for deepening the process is to introduce the opposite perspective (by yourself or by referring to another author or by giving extra attention to a remark of a learner with a different point of view). This can be fruitful when learners are agreeing very quickly on one way to look at that-which-is-at-stake. Doing so, you should be careful not to get (too quickly) in a ‘what’s right or wrong?’ dialogue when introducing a different perspective, but rather trying to have them opening up their minds, suspending their judgments and to really begin exploring.

Fourth strategy: learners questioning each other

Try to stimulate learners to question each other as well: ‘is it clear for you what Mark is saying now? What do you think about Mark’s point of view? Is he not saying the opposite as you do?’

First point of attention: do not impose your questioning

When deepening the questioning in the learning group, you should be careful not to impose your questioning too much. Find the balance by being attentive on how learners react to your question, also non-verbally: “do they take the question to go deeper? Or not? Why could that be? Have I questioned them too much? Is the questioning maybe less relevant to their learning process? Or are they just in a lazy-Monday-morning-mood?” Maybe the following metaphor can help you in finding this balance: questioning and answering can be understood as spontaneous process of flooding new land. By questioning you are digging a bed or watercourse for the water to run into. Essential is the fact that the water should not be limited to the bed, but has the possibility to inundate and fertilize the surrounding environment. So, by questioning you are not building a preconceived structure of dams and canals to control the water completely, but rather you are engaging in a sort of spontaneous evolving play with the low and high tides of the stream. Questioning this ways requires from you to be very  clear on the learning context and goals of your course (which content, which goals, which engagement?). It’s determining a sense of direction for the reflective process and function as a kind of ‘point of validation’ for questioning: which questions do make sense, which not? The learning context let you know where to start digging beds.